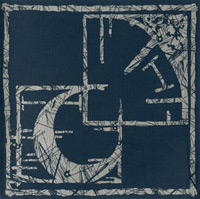 According to Pat @ hyperrealist there were 2500 copies of the EP pressed.

With only the 3rd press having a two color disk face.

Remastered versions of the tracks from the demo. The Studio Banter track from the Cdr’s was also left off this release but there was an addition of “In The Nervous light of Sunday”.
Sections from the booklet that came with some versions of the Cdr were used in the lyrics insert.
There were a few copies distributed at a later date when a stack of covers was found years later. These copies have slightly different colored CD’s with grey and blue instead of blue and clear/silver faces.